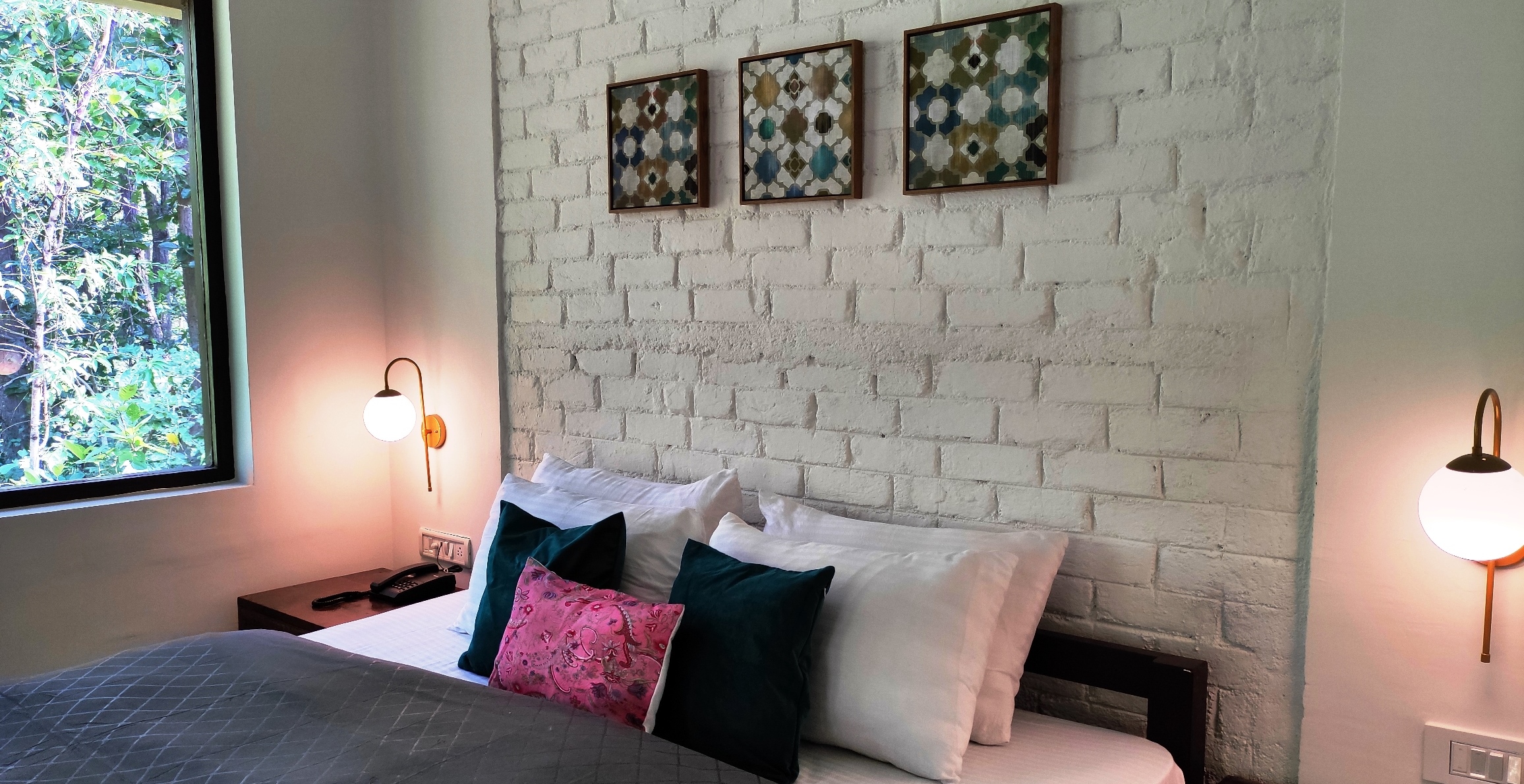 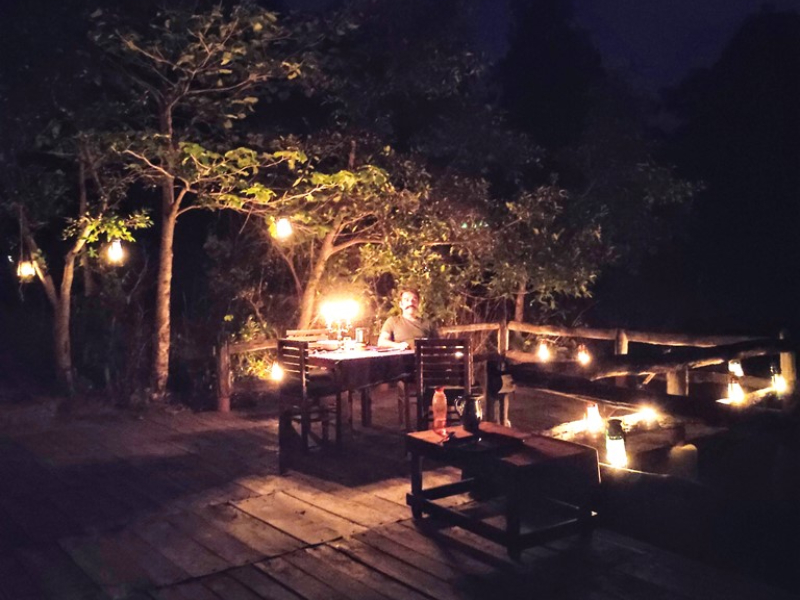 Saccharum Safari Lodge is built in a 55-acre private jungle skirting the Kanha Tiger Reserve, in the central Indian state of Madhya Pradesh. This 18 room safari hotel offers all modern comforts and an interpretive wilderness experience built around the central ideas of sustainability and conservation.

Saccharum Safari Lodge derives its name from the sweet Saccharum grass growing abundantly in the meadows of Kanha & the meadow at the property. A part of the sugarcane family; Saccharum is the primary food source of Kanha’s iconic animal - the Barasingha. Locally called ‘Kans’, this grass is also seen as a harbinger of prosperity. The name is a homage to the humble grasslands, that support herbivores which in turn are food for the mighty Tiger.

A prime Tiger habitat, the jungles of Kanha have enjoyed a protected status since 1879. The Park was among the first declared National parks in 1955 and subsequently in the first set of Tiger Reserves declared in 1973. This dense jungle spreading over 2000 km sq. is one of the largest Tiger Reserves in the country.

The region is known for some of the ancient tribal communities like the Gond and Baiga that still inhabit the region. Glimpses of their evolved and highly sustainable lifestyle can still be witnessed in small hamlets peppered on the outskirts of the reserve.

Kanha is a frontrunner of fine conservation practices & sustainable tourism initiatives. Most noteworthy among them has been the return of the hard ground swamp deer, the Barasingha from the brink of extinction. 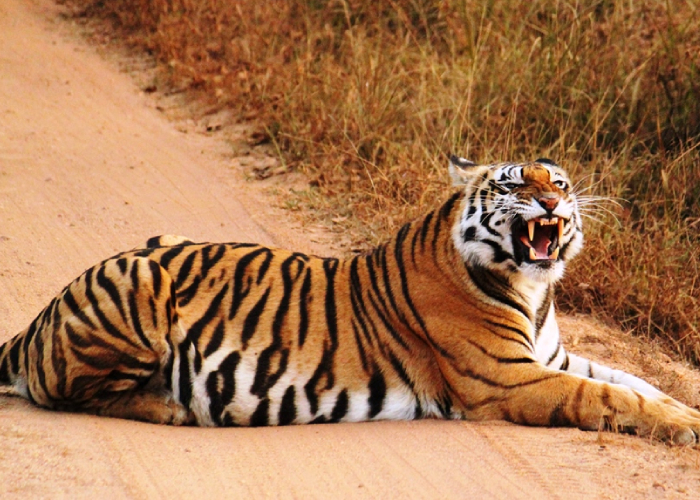 Saccharum Safari Lodge is foremost a labour of love alongside being a business. Having schooled in the finest Wilderness Hospitality companies of India and South Africa, the owners place sanctity of the wilderness at the heart of all operations.

The ethics of sustainable Tourism & conservation are reflected in the composition of the team. Over 96% of our staff are locals, trained to provide a world class service.

Fantastic Stay at Saccharum Safari Lodge!  A beautiful 55 acre forest property bordering the Kanha National Park. The rooms were spacious, neat and clean.  The food was excellent, varied with seasonal fresh produce being used. The kids were happy with Chinese, Mexican, Continental and Indian dishes. Kudos to the chef for well planned meals in the middle of a jungle!  The staff are very helpful, polite and happy to engage in conversations about your safari (everyone who comes back from one wants to share their stories) or show you around the property. Our safaris were arranged by the lodge and we had skilful drivers every time.  Overall it was a great stay and we look forward to going back again soon.
Payal S. , Nov 2021
A stay highly recommended for nature lovers!  We stayed at Saccharum Safaris for 7 nights with our 8 year old son. The stay was nothing short of mesmerising. Set amidst 55 acres of wild forest , the property makes you feel as if you are inside the core. It was not uncommon for us to routinely see langurs, the resident barking deer and a large number of bird species. The Machan and the river deck are especially great spots to spend your time in between safaris. The entire staff made sure we were comfortable and well looked after. A special shout out to Wasim and Ratna - for going above and beyond to ensure a memorable stay; and the Chef for putting in a lot of thought and effort in the menu and food. Not only did we have different dishes each and every day, but they were all meticulously executed too. Our son found the expanse of the place liberating, and was constantly entertained with the variety of wildlife species around. We will definitely be back!
Ms. Pooja A , Nov 2021
I feel proud & privileged while writing this review on our memorable visit to KTR and highly commendable stay experience at Saccharum Resorts. It was an excellent, very well organised and comfortable stay in the midst of beautiful jungle which gave a realistic feeling of being in jungles. The natural ambience is mind blowing and cant be explained in words. The hospitality efforts by entire fraternity of the resort was highly appreciated by my family including kids. Special thanks to the humble Chef who was wholeheartedly devoted to food choice of every guest. Nothing more can be asked what we received there. It was terrific experience being there and we carried memories to cherish forever. I strongly recommend that every nature enthusiast must visit this resort. Grateful to Wasim and Ratna for wonderful hospitality !!! Regards !
Lt. Col. Pathak , Oct 2021
“’Visited with family in Feb 2020. Clean, good food, bucket load of butterflies.. Good site team from Akshendra, Madhuri, Deepak, Hemraj. One can do birding right in the place. We saw golden backed Maratha woodpecker, racket tailed drongo, grey hornbill sitting at the lunch table..’’
J Kepler , Feb 2020
Thank you Wasim. You were wonderful. all of us reached your place as guests and left as friends. the walk into the forest was scary but fun. And now you and Ratna are my daughter’s hero. Gr8 food..lovely quaint property..cottage 101 is right on the bufferzone..a must visit for forest lovers
Srijib , Jan 2020
Set against the sanctuary, this resort is incredibly organized for nature lovers and is a great place to de-stress and chill in a perfectly Sylvan setting. Wasim is a remarkable host and his knowledge about the flora and fauna helped make good the treks and safaris. The staff is exceptionally hospitable with consideration for our privacy. Food was out of the world. The chef is equally at ease with world cuisine and spun dishes on the table with great finesse. All in all, a great place for a vacation in the wild
Madhavdas , Nov 2019
Wasim and his excellent team and a super chef A Chouhan ensured that the entire stay was comfortable and interesting. The trips to the Safari, the walk, the swimming pool experience, the tribal dance, the friendly and honest staff made our stay extremely enjoyable and memorable. The ex-army officers and their wives Golden SODE thoroughly enjoyed the stay
Sheiba Gomes , Nov 2019
View All

Beginner’s Guide to: ‘Why Save the Tiger’?

The world has so many ‘Days’ nowadays to bring focus, commemorate or remember, people, c…

The Laughing ghost on the Banyan Tree

Talk to us for ongoing Offers & Deals